It’s been a while since I did a monthly experiment post. For June I decided I wasn’t going to take on anything official and that pretty much continued into July.

This has been a very fragmented month: I spent the first week petsitting out in VA and completely removed from my normal routine (I skipped barre that week in order to drive back to VA after work and hang out at the pool in the apartment complex. I regret nothing about zero workouts that week since I normally don’t have access to a pool!). And I just got back from another entire week on vacation. At the end of June I was desperately trying to figure out my living situation; turns out I didn’t move but I did need to find a new roommate, who just moved in a few days ago.

But anyway. All that is to say that after a break in June, this wasn’t a good month to take on anything new, either. Although I did try a vacationing experiment last week!

I did have a few loose goals for June:

I’ve got some things I want to accomplish this month:

• Finally switching out my winter clothes for my summer ones and getting rid of clothes I no longer wear in the process
• Continued decluttering
• Maybe even doing something with the box I have in my room where I corral all the things that are victims of decluttering?
• Lots of blog admin things, including catching up on responding to comments, which I am ridiculously, shamefully behind on, and I’m sorry about that

Ahem. It’s obvious where I stand on the catching up on responding to comments thing. But I’m trying and I’ve definitely responded to comments on at least a few posts!

Moving the things I’m getting rid of physically out of my apartment instead of just corralling them into one space? Absolute failure! But I am actively adding to the decluttering box while it’s sitting there.

Off on a tangent

On a vaguely related decluttering note, let me show you this picture of a weird, awkward corner in my apartment next to the fridge. 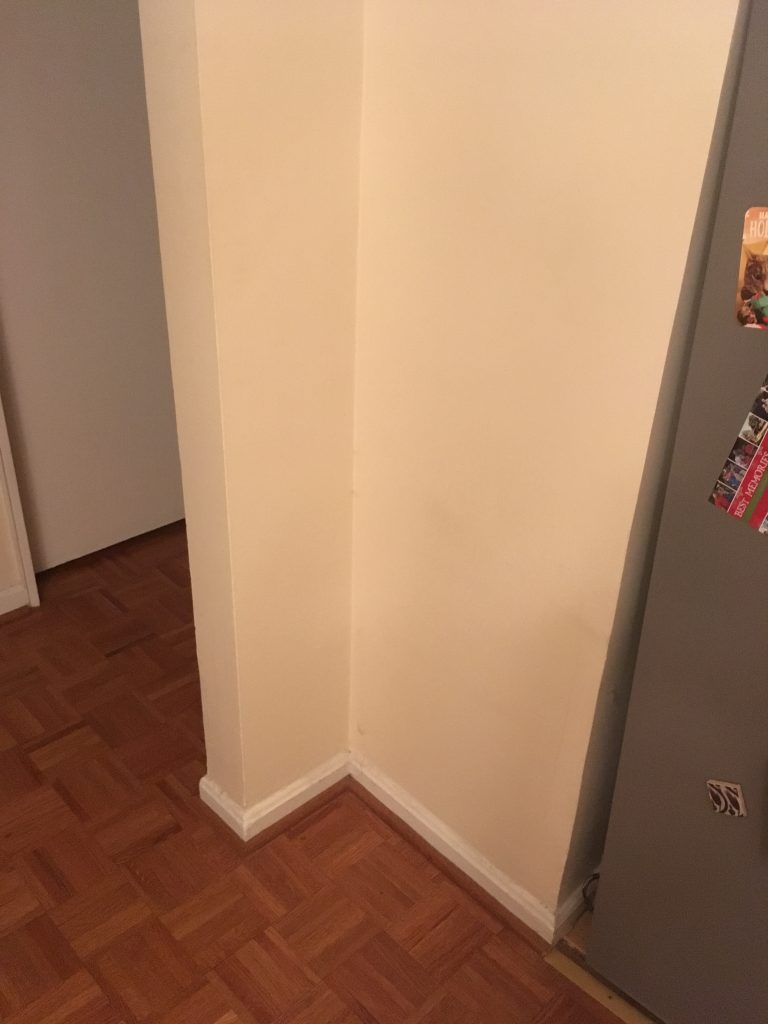 When I moved in, I had a foldable table that fit in that corner perfectly when folded up. It was good for being a place where I could set my food processor and a bowl for produce. And it was good for the occasional game of beer pong. Can you tell my first roommate was a college friend I met while we were both studying abroad? ?‍♀️

I sold that table last year when my third roommate moved in, both because she had a stack of shelves that could also fit in that space perfectly but held way more (she moved in with a bunch of her own kitchen items), and because my table spent way more of its life as a shelf than a table. When I have groups of people over and we need more seating than my dining room table provides, we move into the living room since the dining room/living room are all one big space. Plus no one’s played a game of beer pong in this apartment for a few years. The $50 I sold the table for is definitely reflected in the side hustle income line item of some spending report from about this time last year.

But since my roommate took her shelves with her when she moved out last week, that’s meant for the first time ever, this awkward corner is sitting awkwardly empty. And IT’S BOTHERING ME. I know I’ll get used to the emptiness eventually, but I’m surprised at just how much of a reaction I’m having to it. I am itching to find a suitable replacement somehow by moving some furniture around (never mind that I no longer own anything that fits there) but I am resisting that urge and trying to remind myself that having empty space is a good thing if I want to work on decreasing my posessions.

My experiment for August is simple. Back when I was doing the no screens an hour before bed challenge in May, I started tracking nights I managed to put my damn phone down (it wasn’t pretty—there were way fewer nights than there should’ve been) with an app called Strides. (Shoutout to my challenge partner Young FIRE Knight for doing the work of finding the app so I could shamelessly steal that idea! ?)

I have absolutely NOT kept up with the no screens before bed thing since that month. Because if you’ll remember, that was kind of a disaster. But I have kept the app on my phone, and in May I added additional things that I wanted to track, not just the no screens.

As of right now, I have four things I’m tracking in the app. I have a goal set for going to barre three times a week (hahaha my average there is not great), and then a simple yes/no tracking set up for meditating, foam rolling/stretching, and using Tip Yourself (because hooray for savings and that app isn’t automated so a reminder sometimes comes in handy).

Except that I fell off the tracking wagon pretty much as soon as the no screens challenge was over. I’d sporadically track a completed barre workout or meditation session when I remembered, but my “progress” in the app for much of June and into July is largely a whole lot of nothing. Throughout my life I’ve gone through patterns where I’ll get into a habit but then have an extremely hard time picking it back up again if I fall out of it. And sometimes that leads to me just giving up on the habit and moving on.

So my goal for August is simply to use the app to track things every day (if, for example, I don’t meditate on any given day, that means going into the app and actually marking it “no” instead of passively not marking anything in the app either way).

I’m not putting any numbers to these goals (other than the longstanding three times per week goal for barre classes, which should correspond with me stretching and foam rolling at least 3x/week, even though ideally I should be doing that every day); the challenge here is simply to track them.

I suspect that getting into a habit of tracking will force me to start doing these things more often anyway. Because yes, for goals that are a simple yes/no, did the thing happen or not?, this app tells you your streak. Even a two-day streak is a whole lot more motivating than a -7 day streak (so I didn’t stretch or meditate while I was on vacation at the beach. Thanks for rubbing that in!) so I’m guessing by the end of August I’ll be doing things more often simply to keep the streak going.

I don’t foresee myself adding anything else to track in the next month, so in theory it’ll just be barre classes, stretching, meditating, and throwing money in my tip jar. Although I should probably add flossing my teeth to the list of things I track since that’s one of those things I ALWAYS forget to do…

I’ll admit I’m cheating a bit by trying to get into the tracking habit even before August officially starts, but hey, I make the rules here on my blog, and I say that we’re close enough to August that this cheating a bit is allowable!

6 Replies to “Twelve months of experiments: June and July 2018”