Whew, I’m back from essentially two straight weeks of vacation (oops) and catching up on Real Life, Responsibilities, my workout routine, joyfully returning to a veggie-centric/non-fast food diet, etc. Clearly there’s a lesson to be had here about the need to start queuing up posts for weeks like this where I can’t seem to find time to write, but ahem. I’m back!

Once upon a time way back about 2.5 weeks ago, my sister and I were driving from DC to the beach for our extended family’s annual beach week. We were talking about life in general, and given that I’m a PF blogger/junkie and it’s near and dear to my heart, we were of course talking about money in that general life conversation. I’m sure she’s ecstatic to be related to me when the topic inevitably turns to finances, but no worry. Some day she’ll totally appreciate the fact that I’m already having conversations with her about how to be a badass with money before she graduates college.

I don’t remember exactly what all I was telling her, but I do remember talking about the concept of hedonic adaptation. You know, the idea that there’s always a bigger, better thing that we want in order to be happy. Only it turns out that once we get that bigger, better thing we’re not actually as happy as we thought there would be, plus there’s another, shinier thing that we should spend our money on and then we’ll be happy. It’s a never-ending hamster wheel of desire, buy, move on to the next thing, and it’s insidious and sneaky. I still occasionally find myself thinking I’m sure I’ll be happy/er once I have this thing even though I’m actively working to get rid of anything that isn’t truly conscious spending.

Although in my case at least the constant upgrade desire doesn’t hold true for iPhones since the 6/6s/7 are all too damn big for me to securely hold in one hand. Since constantly dropping my phone is not a thing I want to do (nor is giving myself tendonitis in my thumb by constantly having to stretch to reach across the screen. I usually type on my phone with one hand, okay?), I guess I’ll hang out here with my SE for a while and hope that when my phone inevitably gives up the ghost in a few years there’s still a small-screen option available for me. But I digress.

At this point you’re probably asking exactly how does spending all our money on endless consumerism of newer, better things relate to traffic? 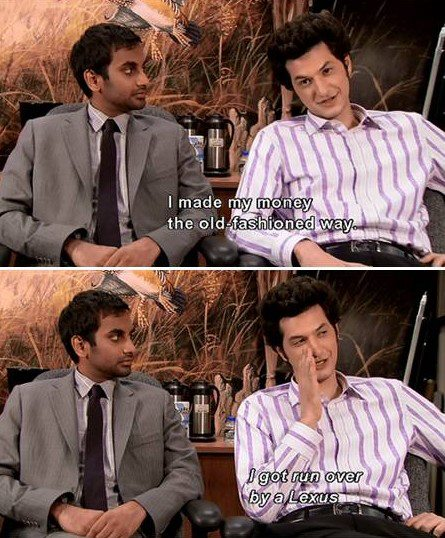 We weren’t making terribly quick progress out of DC and I started noticing just how many people I had to pass on the right and getting annoyed. I’m not an aggressive driver by any means (I’m actually super defensive and driving in this city scares the hell out of me because my southern suburb high school existence didn’t prepare me for this). But when I get up at 6:00 on a Saturday morning and I’ve got a 6+ hour drive in front of me if all goes well and there’s no traffic (hahahahaha), you’d best be going MINIMUM the speed limit in the fast lane in front of me and preferably at least five over, buddy.

As I passed yet another slow left-lane driver on the right (seriously, what is it with people not understanding the left lane is for passing, not for your leisurely Saturday morning meander through Virginia or North Carolina?[*]), it suddenly occurred to me that the narrative going through my head was not much different from the one that happens when I fall into the trap of thinking I need something. If I can only pass this person I can get to that bit of road up ahead that’s clear of people and then everything will be great. But since I don’t drive 10 under the speed limit, there will always be another person to pass. The free stretch of road ahead devoid of traffic will inevitably give way to another pack of people, at least on I-95 during any daylight hour on any day of the week that ends in… well, -y.

So, constantly buying things won’t bring us happiness, and it turns out constantly aiming for that awesome traffic-free bit of highway up ahead won’t either.

Instead of succumbing to rage and hanger (the rushed coffee and granola I’d had at home before we left were long gone and it was time for a coffee/breakfast sandwich[**] stop pronto) I could instead accept those facts, breathe, and pass the people that needed to be passed. Or slam on my brakes while we all slowed down to 20 mph for seemingly no reason. That, too. There is no winning with traffic.

[*]Side note: I often say Maryland drivers are the worst because they are. Whenever someone tries to run me over as I’m crossing the street (at the crosswalk, I might add), it is without fail almost always someone with a Maryland license plate. For fuck’s sake, stop trying to kill or seriously injure me.[***] There also seems to be no happy medium with MD drivers on the highway: they are either going suuuper slowly, or passing you at about 90 mph. But. I’d heard people complain of NC drivers before but never really understood until I’d moved out of the state and then a year ago got my car and started driving again. Y’all, we are horrible. Quit driving in the left lane, slow NC people!!!

[**] also side note: breakfast sandwiches are life. Delicious, usually expensive, life, which is why I usually restrict my partaking of said life to when I’m traveling. (Hey, look, making them a rarity means I combat the hedonic treadmill of breakfast sandwiches!!)