Apparently it’s December already; is anyone else feeling like fall didn’t actually happen and it’s nowhere near time for winter yet? No, just me? Okay, then. At least the end of November comes with everyone putting up their Christmas lights!

Believe it or not, I only went hiking one weekend in November (this is actually not a surprise because cold weather is the worst). Due to the ridiculous amount of rain we’ve had this year, the trail I’d chosen for hiking was flooded out, so we had to improvise. No big deal, at least it was a sunny day, if a bit chilly!

I did take advantage of a lovely warm weekend day to walk around DC. Sometimes I forget that I live here and see things every day that lots of people come here to see.

Took advantage of the unseasonably warm day yesterday to go for a long stroll. I’m thankful both for opportunities to get outside (I’m already resisting the urge to go into hibernation mode for the winter) and that living in DC means I get to see so many cool sights on a regular basis. I try not to take that for granted ?☀️?

A tale of two pets

What I lacked in hiking in November, I made up for with pet hair. Lots of pet hair, all over my clothes.

Specifically, I went home for Thanksgiving so I saw my parents’ dog, but I also got to meet my kitty niece for the first time since my younger sibling got her. This has nothing to do with personal finance or my spending or lack thereof. I just wanted an excuse to post a bunch of photos. 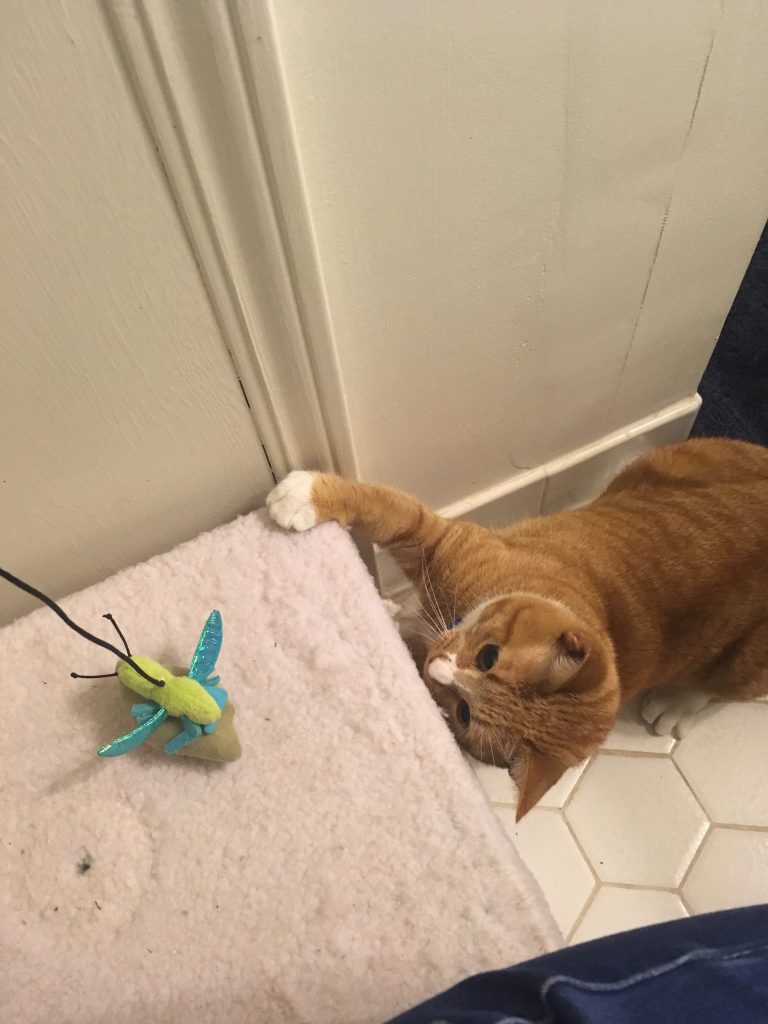 “What if you just dropped that whole turkey for me?” #thoughtsofdog Happy Thanksgiving, everyone!

He did not get the whole turkey. But he did get some turkey skin and obsessively licked up a few drops of grease that spilled on the driveway. At least that was a welcome departure from the same-old, same-old of his regular toys.

I upped my retirement contributions. Again

Last month I started doing some math with my income and tax brackets. It’s still a bit unclear how much I’ll take home the rest of this year from my part-time job, but I decided since I was on the line between brackets that I wanted to play a game to keep myself in the lower bracket.

I know, it’s only the next dollar that gets taxed at the higher rate so I’d owe approximately $2 extra in taxes if I do end up having some fantastic shifts at work and bringing in enough extra money to bump me over the line. But still.

So I decided at the end of October to up my retirement contribution from 25% to 30%. I’m adding an additional $44-ish to my retirement per paycheck, but I’m only down about $36 per paycheck (yes, I get paid weekly, which is why my paychecks are so relatively small). Hooray for tax-advantaged savings!

However, it’s been…a struggle. I’m finding myself feeling broke after sending payments over to one or another credit card every week after I get paid. I could pause my aggressive savings app withdrawals to keep some more cash in my checking account, but don’t see the point in that.

This for sure isn’t going to continue after the end of this year since my cash flow already was a bit lower than I’d like, and now I’m bringing in even less. But it’s an experiment I felt was worth doing for the last two months of this year. When I lower my contributions back down to a more comfortable level, I’ll make sure to stop them somewhere in between 25% and 30%;  I’m now used to slightly less money than I was bringing home with my 25% contribution so it’s a perfect time to raise that a percentage or two.

I unofficially decided to do a no-spend month in November after the previous few spendy months. How’d that go?

Hmm, I’d say that was a success, even with the unavoidable costs of blog hosting renewal and car registration!

Oh yeah, and I got to see Hamilton again while I was home for Thanksgiving. Which was an early Christmas present from my parents, and the price of $free.fifty-free made the show even better!

18 Replies to “November 2018: no-spend month and giving my retirement funds all my money”