Hi, everyone, I’m back! Did you miss me? Of course you did. Fret not, I made an immense effort (aka I stayed up late on a night I would’ve loved to go to bed early, let alone on time) to get this out on my normal posting day so you could read about all the fun I had while I was away and be jealous!

Months ago when Angela first told me she and her family were going to do an east coast roadtrip, we started figuring out how to make it work so we could meet up. Silly them, they skipped DC (something preposterous about you need more than one day for the city? Oh wait, actually that makes perfect sense), so based on their trip it made the most sense for me to take a day and a half off work the week before Memorial Day weekend to drive down to Williamsburg and spend one of their two nights there with them.

Except unbeknownst to Angela, Military Dollar (henceforth known as Mil$) and I had been secretly plotting for weeks that she would join me on the trip and we’d surprise Angela. We had a couple of scenarios planned for how to accomplish the surprise once we got there, none of which panned out, but surprising her was still fun.

We got in later than planned (sorry, Angela and family, but now you know why!) right before dinner. We spent some time on the playground (it had swings adults could sit in!) and had a four-way water gun fight with the kiddo while dinner was cooking—hot dogs and hamburgers made in the hotel room kitchen since the gas grills proved impossible to light. Instead of going out that night, the adults stayed in to drink and play Cards Against Humanity. Except first we needed to go to Target to get CAH. And some more beer, of course. And some snacks. And Mil$ found an amazing stuffed dragon/unicorn convertible hybrid that she bought for someone she knows.

@reachingforfi, @TreadLightly_RE, and @Military_Dollar enter a Target. Twenty minutes later we leave with Cards Against Humanity, jalapeño potato chips, Pop Rock Oreos, 24 beers, and a stuffed unicorn that turns into a dragon.#TrueStory

The next day we visited both Williamsburg and Jamestown before Mil$ and I drove back up to DC.

Back in March I booked a flight to see one of my friends in Florida over Memorial Day weekend. Because she lives so far out on the panhandle, I had a few options for airports to fly into. I chose New Orleans because it was one of the least expensive options (and a direct flight!), plus I’ve never been, so the plan was to spend Monday night in NOLA. Back in the horrible, cold, dark days of winter, I was looking forward to two or three days of laying on the beach soaking up the sun (always #solarpoweredhuman), then on to NOLA before flying back to DC Tuesday evening.

All of a sudden the forecast was four days of thunderstorms, plus fun things like tropical storm, rip current, and flood surge warnings. For all you Gulf Coast residents who aren’t used to it, waves like that are just par for the course on normal oceans like the Atlantic 😉

Because we weren’t sure how the weather would be—if we’d be able to drive from Florida back to NOLA on Monday or if we’d have to wait until Tuesday—when my friend picked me up at the airport we headed into town to do some exploring in New Orleans.

First up, lunch at Willie May’s Scotch House, supposedly the “best fried chicken in NOLA, possibly the country,” according to Bon Appétit. There was, as expected, a huge line and we waited about an hour for our number to be called. I had chicken tenders, red beans and rice, and a cornbread muffin (and raspberry iced tea as a compromise because the meal most definitely called for sweet tea but I’m just not a good enough southerner to enjoy drinking it). It was glorious, and if you didn’t see my Instagram story over the weekend, you seriously missed out. There were food pics galore!

We then headed to the French Quarter to wander around. And, in the most surprising (not surprising) plot twist ever, we found ourselves at Café du Monde for a little afternoon snack of beignets. I’ve refrained from eating too many beignets in my life because they weren’t the real thing, so obviously we had to go and split an order so I could eat real ones. I also tried the coffee with chicory in it (iced because it was too damn humid for hot coffee), which was the perfect slightly savory note to compliment the ridiculous piles of powdered sugar on top of our fried dough.

I did not die from accidental inhalation of powdered sugar and subsequently choke to death. I also managed to walk away with a minimum of powered sugar on my clothes. All in all a very successful introduction to real beignets.

After a mad dash to the car when the skies finally opened up on us, we made the rainy three and a half hour drive to my friend’s house in Florida. The plan was to be virtuous and eat dinner at her place, but we were way too hungry to wait. We stopped in Pensacola for some ramen (even I had to admit defeat and couldn’t finish my bowl. Anyone who has met me knows what a big deal that is), then on to her house. 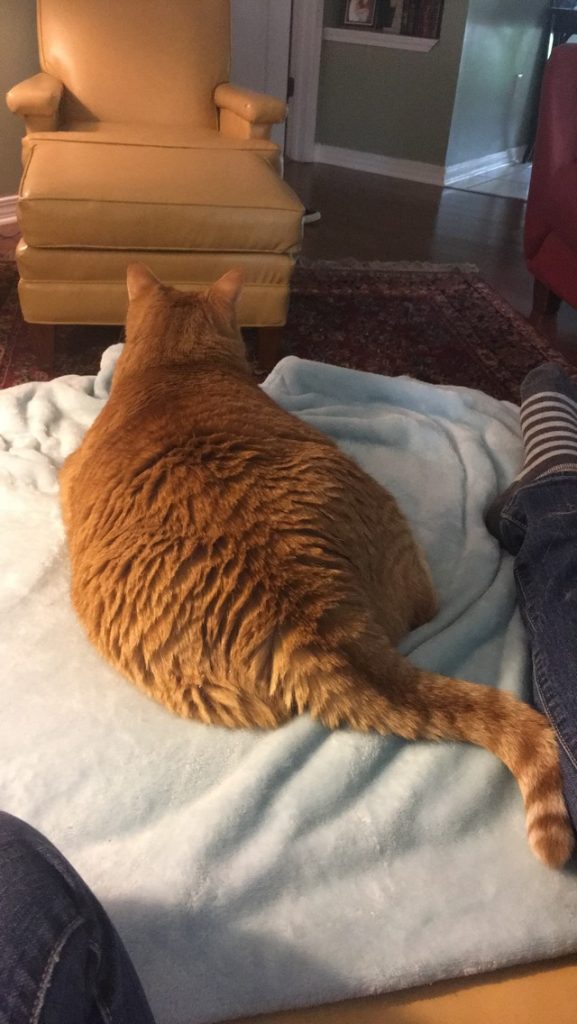 Despite the looming threat of impending sub-tropical storms, Sunday was beach day. Maybe I couldn’t actually get in the water (different colors of flags flying/the beach technically being closed is something I’ve never seen on NC beaches), but I was going to sit on the sand in the sun, dammit! It was a lovely partly sunny, partly overcast day anyway. What sub-tropical storm?

Our entertainment for the afternoon was a blue heron who flew over to our area of the beach and immediately started stalking a group of people who were fishing. When they didn’t give it anything it eventually gave up and went to go intimidatingly stare at another group of people. Who threw it a fish ?‍♀️

Turns out I didn’t need more than one day/a few hours at the beach since I started typing this while waiting in the airport for my flight back and I’m still sporting a slightly-itchy sunburn two days later [ed note: ahem, still occasionally itchy now three days later and at the indeterminate stage where I’m reasonably sure it’ll fade into a tan instead of reverting completely back to my normal pale state]. This is why my family goes to the beach in the morning, comes back in for lunch, and then goes back out again later in the afternoon when we don’t need sunscreen. Three continuous hours out on the beach is not something I’m used to doing and it totally slipped my mind to reapply sunscreen. Whoops.

After a movie in the afternoon and learning that the storm STILL wasn’t an immediate threat, we headed back out to the beach for an evening walk. We were there for the sunset and it was amazingly glorious with the storm clouds turning a gorgeous purple and the sand and water reflecting pink from the sun. 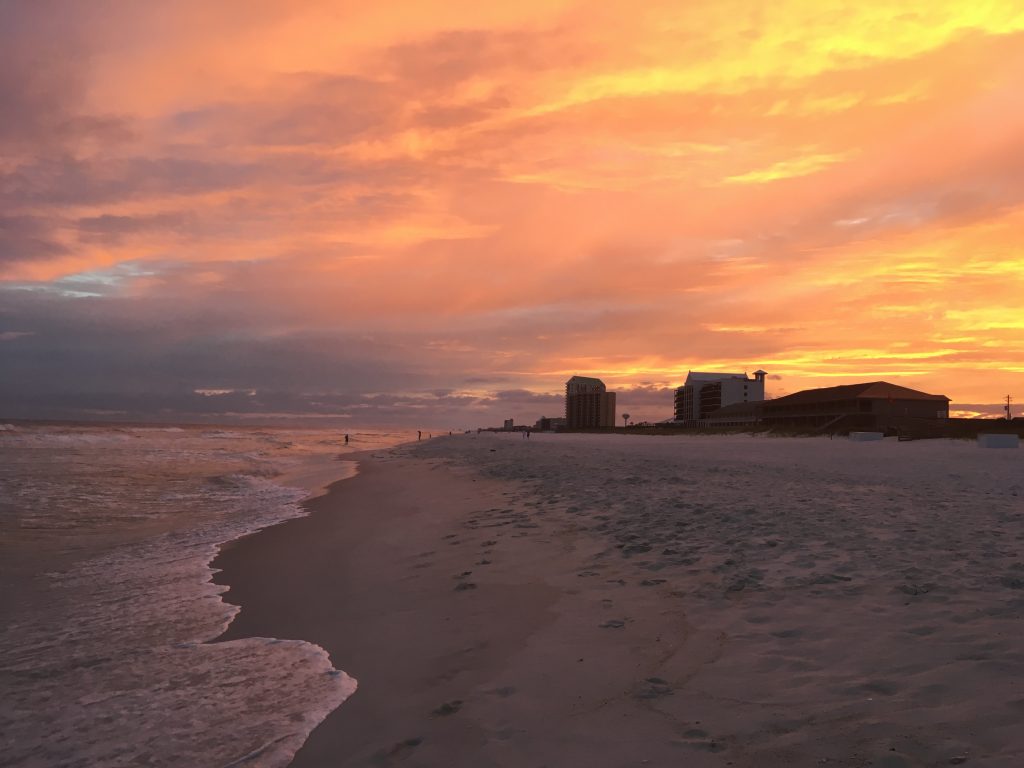 Lunch was chicken salad sandwiches on the beach and dinner was a Cuban beans and rice recipe. Total for the day was $0, hooray.

Back to New Orleans

Halfway through an incredibly lazy day on Monday (the kind where we watched two movies and I had to—unsuccessfully—constantly talk myself out of feeling anxious for getting nothing done and “wasting” a day ?) we’d watched the always-shifting forecast enough to determine that since the warnings got cancelled anywhere more than about an hour west of us and the storm still hadn’t quite made landfall yet, we’d eat an early dinner of leftovers and head out to New Orleans. I couldn’t cancel the room so we were paying for it either way.

I know, I know, driving in a storm, etc, but WE WERE FINE. It had hardly rained all day at my friend’s house (her house isn’t in the storm surge flood zone anyway) with just occasional gusts of wind, and the rain wasn’t too bad while we were driving. By the time we got to Mobile, Alabama, we’d found the outer edge of the storm and were treated to a huge double rainbow to the left/behind us and a gorgeous sunset to the right and ahead of us.

So we checked into the hotel, got the very unpleasant shock of how much the “valet” parking cost (if by “valet” they meant “self park, and pull up as close as you can to the side of that building so there’s half a chance anyone else can get out since there isn’t enough space in the tiny lot, and then give us your keys” then sure. Valet parking), and decided to take a walk around. We were in the French Quarter so of course we had to check out the night scene on Bourbon Street.

Bourbon Street reminds me a bit of downtown Vegas, but dirtier and grittier. And without the casinos (and with beads everywhere).

After we’d cruised up and down the street, we headed towards the Mississippi river, sat at the water’s edge for a while, and then got a midnight snack of an order of beignets at Café du Monde. As you do, especially since it’s open 24/7.

Nostalgia and walks in the park

Tuesday dawned hot and bright, and we got lucky since the rain held off until I was already at the airport. We took advantage of the hotel’s free breakfast, obviously. That parking fee still stung. We walked around Louis Armstrong park before we headed out, then spent quite a while figuring out where to eat for lunch since the place we’d been planning on going to is closed on Tuesdays. Food is serious business, y’all. This took quite a while, especially because we weren’t trying to spend an absolute fortune on this last meal.

Luckily we made a good choice. I had a fried oyster po’ boy and it was heavenly.

After all that we needed to walk some of our lunch off, so walk we did. We drove down St. Charles Avenue for a while to see the gorgeous mansions there and ended up at Audubon Park. We ended up walking about five miles, around the entire park and around both Tulane and Loyola’s campuses. Did you know the universities are literally right next to each other?

It was odd being on the campuses and briefly feeling like a college student again. Do you ever stop to wonder what your life would look like if you’d gone somewhere else for college, or is that just me?

And that’s how I spent almost an entire week traveling and a couple hundred dollars* during that time. Tune in next week for just how underwater I am this month in May’s spending report!

*Spending time and money on friends is always worth it. Especially if I get to go to new places in the process. I’ve already said before that if I ever actually start budgeting I won’t be setting strict limits on this type of spending. Sure, I absolutely could’ve spent less on my Florida/NOLA trip but I don’t regret what I spent at all, and I got four quality days with one of my high school friends.

13 Replies to “Late May peregrinations”