One day I’ll learn to actually finish drafting posts before I go on vacation because it’s just not gonna happen while I’m gone, even if they’re 90% done. And then it’s super not gonna happen while I’m moving soooooo… hi, hello! It’s been a while! One day I will live in a fully-functional, unpacked apartment! But until then, here’s June’s spending.

Lots happened in June: I started off the month with a trip down to the beach for a high school friend’s wedding. Or rather, that happened at the end of May but the rest of the weekend fell in June and so did that spending.

And then something rare happened: I went hiking all four weekends in June. One of those weekends involved crossing off a 2019 bucket list item and using the sleeping pad I bought in May (which is also why I already know it’s very likely going back): my partner and I went camping. Camping means very little sleep for me (especially when your supposedly thick sleeping pad feels no different to your hips than sleeping directly on the ground…), but it also meant that I got to check out some new-to-me hikes in the southern part of Shenandoah, which is a bit farther than I’m willing to drive for a single day trip. 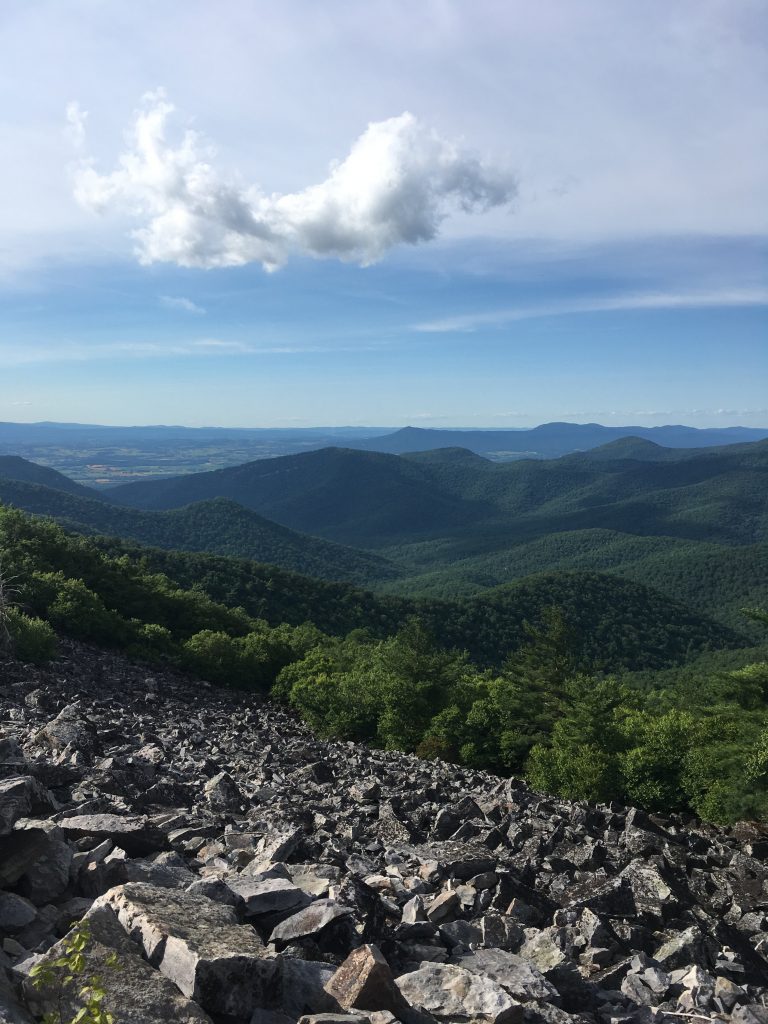 I found myself with a rare weekend with no work obligations, so my partner and I headed out to Shenandoah to go camping. We knew we wanted to watch the sunset, so we grabbed a bottle of wine, some chocolate, and left our campsite to drive to a nearby west-facing overlook. 10/10 would definitely do again!

Y’all, I can say with absolute certainty that I would way rather be back outside sweating buckets like I was during this visit to Manassas battlefield a few weeks ago than packing up to move like I am/should be right now ??

I also went to a conference for work—my first-ever. It was in Baltimore so luckily it wasn’t too time-consuming or expensive to attend. I got my conference fee reimbursed by work but none of my incidentals (food, transportation) because #nonprofit #wedonthavethemoneyforthat #justalowlyhourlyworker.

I’m at a conference for work but because I’m a lowly hourly employee and we don’t have our shit together, I’m not getting my meals reimbursed. However, this is currently 110% necessary. RIP my retirement ? pic.twitter.com/BfJcDCWzJq

Luckily I did have free housing because I stayed in an Airbnb with a coworker who got all her conference spending reimbursed since she was on a panel, which saved me from the very ill-advised plan I had of just taking the train back and forth every day so I could sleep at home. And all told, I’d rather have paid for my train tickets up/back and food/coffee than the conference fee itself.

Many adulting lessons seem to be car lessons…

My partner and I were coming back from a very long day of hiking and it was decidedly time for dinner when I walked by my car and noticed a decidedly flat back tire (car things seem to coincide with hiking days for me ?). Fuuuuuuuuuuuuck and also why me????

I was not in a mood to be An Adult, but I decided to deal with the damn thing right away instead of having to stress about it the rest of the night and hope that I could get it resolved before driving to my second job the next day. This story could’ve gone very, very differently, especially considering my low blood sugar (I hate to admit it but the Snickers “you’re not you when you’re hungry” commercials are very true for me ?‍♀️), but after some calls to parents, perusal of my car’s manual, stealing Gwen’s car keys to break into her car and get her tire inflator (thank goodness she’d left the car keys at home even though she wasn’t there!), my partner spotting the nail in my tire after we’d reinflated it, some Google magic, and deciding to say fuck it to switching out the tire to my spare since it was holding air well, I drove to the nearest tire shop.

Y’all, that place is amazing. The longest part of the process of them patching my tire was waiting for them to be done with the car in front of me so I could pull out and get home (and eat dinner!). It cost me $15, which I was wildly excited and very pleasantly surprised about, given that tires aren’t cheap and neither is DC.

Tire patched, I drove home, threw a pizza in the oven, and scarfed that sucker down soon after. Low blood sugar did not win the day, and neither did my usual tendency to freak the fuck out about things (#thanksanxiety).

This is why I have $1,000 sitting in a savings account labeled “car emergency fund.” Because shit—and nails—happens. I was fully prepared to have to drop a bunch of money on a new tire. By fully prepared, I don’t mean happy about spending that money—who wants to actually have to use their emergency funds? But it’s such an amazing feeling knowing that expense will be only extremely annoying instead of also causing cash flow stress.

Also I’m going to need to replace one of my other tires soon (why couldn’t the nail have found the tire where the tread is low?), so the mental preparation to dip into my car emergency fund was I guess prep for needing to use it soon anyway. Good thing I know an awesome tire place now!

Tune in…like next week to see how my July spending went ?