Friday evening was not the most fun I’ve ever had in my life.

I left work early so I could head out of town early and hopefully miss the usual traffic, but even leaving slightly before 3:00, I ran into residual traffic very soon after leaving the city (it’s not summer anymore, what the hell is up with there already being an accident and traffic at 3pm??!?). Over an hour and only 40 miles later, it started raining. It actually started pouring, and it didn’t let up for the rest of the trip. I-95 is not only a nightmare traffic-wise, but it turns out it’s not graded terribly well, and I hydroplaned in a couple of different spots.

And also when I stopped to get something to eat after two particularly nerve-wracking run-ins with large puddles on the road, I realized that when I packed for the trip I’d neglected to put the smaller wallet I’d been carrying in a different purse Thursday night for monuments at night (because my full wallet takes up more space/is heavier) into my usual purse. So some very important things were sitting in my room at home instead of in the car with me. Switching between purses is NEVER a good idea and leads to forgotten things approximately 97% of the time, but a girl doesn’t want to carry her large work purse all the time, so what can you do?

Let me tell you, there’s nothing like realizing you don’t have your license to immediately make you very paranoid about being pulled over and immediately questioning if you have a photo of it on your phone for this very situation or if that’s one of the million things you haven’t gotten around to doing… ?

The only saving grace of the trip was that I-85 is graded much better and has way less traffic; even though it was still pouring, I actually felt safe driving the speed limit on that road, as opposed to the 10-15 miles under the speed limit I’d been doing on 95 (this is significant because normally I’m not someone who slows down if it’s raining). So the rest of the trip went much faster and only took the 2.5 hours it was supposed to.

Oh, and my gas mileage was slightly better than it usually is on that trip because much of my slow progress was due to going well below the 70 mph speed limit instead of idling in traffic. Yay?

Honestly I was tempted to turn around after the second heart-stopping second or two where I could feel my tires lose contact with the road. And the people I was going to see wouldn’t have blamed me if I’d decided not to continue that nightmare drive. But I was going home to see my parents.

One of the reasons I haven’t moved out of DC despite years of idly thinking I could or maybe should move somewhere else is because I’m within driving distance of my parents.

Well, in theory. It’s possible to make the trip in about four hours; I’ve done it on one or two wonderful occasions. But it’s almost always at least five hours (usually 5.5) thanks to the horrible traffic that seems to be the default setting of I-95. And thanks to that traffic, I constantly question whether it’s actually worth it to drive to NC on a Friday (usually late) and return on Sunday. If I took a day off of work that would be one thing, but I’m not using my vacation days on a trip that ostensibly is well within driving distance for a quick weekend jaunt.

Driving down to NC makes for a very short weekend and a lot of driving—especially if I-95 is being its usual horrible self with ridiculous traffic, but even if I manage to miss most of it—and I’m anything but rested when I return to my apartment Sunday evening, facing the start of another week and the inevitable things I need to catch up on.

This most recent trip was no different. I’m turning around and leaving again in a few days for Cents Positive. I definitely could’ve used a free weekend at home to do laundry and start packing (especially since Frontier’s stupid baggage restrictions mean it’s going to be a pain to cram everything in my carry-on backpack without it looking like it’s over the “personal item” size restrictions).

But ultimately it’s worth the hassle of making that drive for the quick visit.

And I’m not just saying that because I returned with enough leftovers (#suckitangryleftoversman!) to likely get me through all but one meal before I leave on Thursday.

Plus some other goodies:

Came back home with some of the last zinnias of the season in my parents’ veggie garden (and, yes, an apple pie!!) ?

Mom and I will usually do mother-daughter culture weekends when I come home; last weekend we went to the Carolina Ballet (they were doing adaptations of The Masque of the Red Death and Dracula for Halloween, which we’d seen a few years ago and enjoyed) in the afternoon and saw another show that evening. I crashed Budget Epicurean‘s Halloween party afterwards. I had an appointment for a very long-overdue haircut.

All of these things were fun (and/or necessary, in the case of the haircut), and they’re certainly good reasons to sit through a bunch of traffic! But ultimately I’m there to spend time with my parents. The food I bring back and the ballets and musicals mom and I go see are just icing on the cake 😉

I lived in one city in NC for the entire first 18 years of my life, and one of the reasons behind my decision to come to DC for college was so I could move somewhere far away. If you told college student me that I’d end up being the closest of my siblings to home, I would’ve laughed in your face. But here we are, and I’m by far geographically the closest of my parents’ children to them.

I’m lucky in that I love my family. I have dreams of traveling a bunch during my future FI life, but that’s hard to reconcile with my desire to be near family. I know that’s something I’m going to have to figure out in the future.

My experiences with my grandparents—with losing both of my grandmothers way too young, with a grandfather who’s had Alzheimer’s for years and hasn’t been my grandfather for many of them—have taught me that I need to take advantage of the time I do have with my family members. It helps that my mother’s extended family is large and lives all over the country, so anywhere I go I likely have a great-aunt or -uncle or second cousin not too far away, if not an aunt or uncle. I love that. But that’s not quite the same thing as living near my immediate family.

I know I’m not always going to live in DC, and my parents aren’t moving anytime soon. It’s unlikely I’ll be living this close to them forever. So I’ll take this opportunity to visit my parents periodically while I can, especially since I usually don’t see my dad unless I go down there since his work schedule is way less flexible than my mom’s—usually she’s alone when she comes up here for a weekend.

So despite the tiring weekend and the long hours spent in traffic, I’m going to continue to make the drive every few months. Being able to leave on my own schedule instead of relying on the bus down to NC is one of the reasons I have a car. And it seems only fitting that I use the car I got as a gift from my parents to visit them!

Plus, honestly, who could say no to seeing this guy as well? 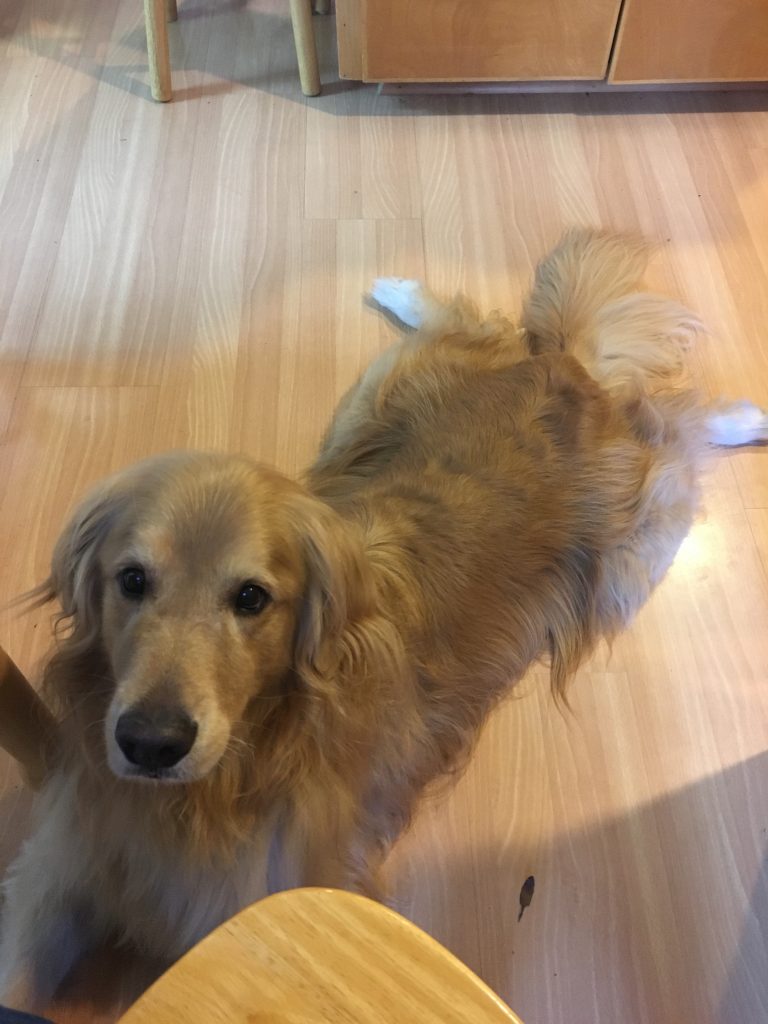 10 Replies to “Family and suboptimal decisions (and lots of traffic)”