Inspired by Luxe’s weekend money diaries, what better post to write than a recap of my recent (okay it was a few weeks ago now—life’s been very busy lately) weekend trip to NYC, especially since I finally met her while I was there?

I originally decided to visit NYC because one of my best friends lives there (and I’m totally taking credit for the fact that she now blogs—you can find her here!) and I hadn’t seen her since her wedding last year. But I also made sure to let the NYC FI people know I was coming so I could meet some of them.

I left work super early for my 1:00 bus to NYC and while I did bring my lunch to work as usual, I also stopped and grabbed a bagel in Union Station because that’s been my bus ride snack since I was in college and taking the bus home on breaks. Chocolate chip bagel and honey almond cream cheese is my combination of choice, in case you’re wondering (yes, I have a massive sweet tooth, why do you ask?).

My bus was scheduled to leave at 1:00 and arrive at 5:20 but we left at 1:30 since it showed up late. If your bus shows up late and you’re flirting with rush hour traffic as it is, you’re screwed. Also it was raining and everyone loses their goddamn mind and forgets how to drive when that happens.

Long story short, I got into Port Authority two hours late. I have no idea what Alison’s plan for Friday night was, but I was starving when I got in, so we immediately went to dinner at a delightful place called Bareburger. We went all out and ordered the onion rings/sweet potato fries appetizer, a burger each, and a milkshake to split because bonus for Alison there were vegan milkshakes!

Satiated, we walked around doing touristy things for a bit: Times Square at night because as cliche as it is, you have to (even if both of you recognize your sidewalk road rage means hanging out where all the tourists congregate is a bad idea. Not being able to pass people easily is a real-life lesson in accepting what you can’t change and letting things go). We ducked into Grand Central because I’ve occasionally taken a train into NYC but for some reason never seen the main concourse. We walked past the NYPL with its lion statues out front and behind the library to Bryant Park, which was lovely at night, full of couples on romantic dates and lots of families with kids (including a bunch of people hula hooping). 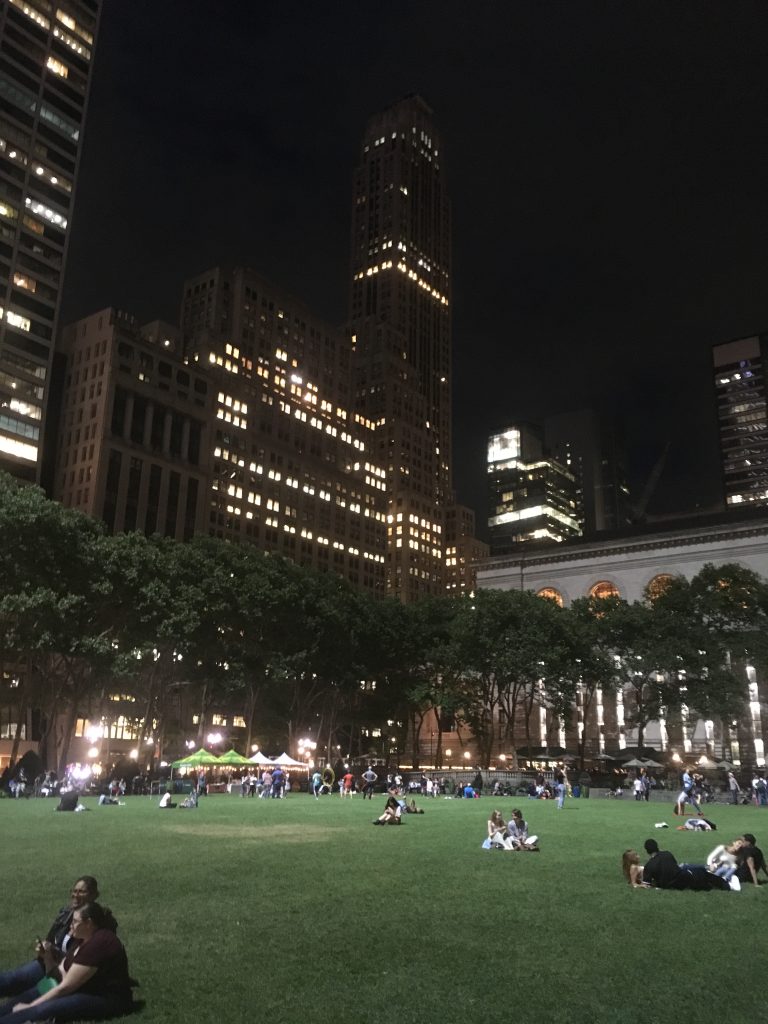 Alison and I then made the subway journey to her apartment in Queens, and because we are old souls who don’t have the energy for going out, Alison had bought some wine so we could crack that open and spend the evening in. We sat and talked for about an hour until her husband got home from work and then the three of us sat around for another two hours.

Alison’s husband had to leave super early for work, but she and I were lazy and got a very late start to the day thanks to staying up too late the night before. I was meeting fellow PF bloggers at a bar at 2, and conveniently Alison works in the area. I saw the museum where she works and then we walked to the New Museum for a bit because one of the perks of being a museum employee is that you apparently get free admission to NYC museums for yourself and another person. I am mad jealous!

The bar we originally were meeting at was entirely way too loud, and while Luxe was scoping out a quieter spot, I got to witness some truly bizarre NYC culture. Tons of people came streaming into the bar at 2:00 on a Saturday afternoon, dressed to impress, and usually in huge groups. Was the plan to day drink all afternoon, go home for a nap, and then change and go back out for the evening? I have no idea, and just thinking about that makes me exhausted. So, you do you, NYC twenty-somethings (but also omg most of you should probably stop spending so much money on bars!).

Luckily we found a spot that was almost entirely empty and all of a sudden could hear what the people next to us were saying. What a novel concept! It was nice to meet some of the NYC bloggers, and thanks again to Luxe for organizing.

After the meetup, Alison and I swung by this amazing place called Eataly to pick up bread, olives, and fresh pasta for dinner (honestly I’d be in so much trouble if I lived near somewhere like that because it was like walking into paradise), then headed back to her apartment to make dinner and drink a bottle of wine. All three of us decided that ice cream sounded good, so we headed to the Burger King for some soft serve. Sure, I like my fancy ice cream, but sometimes a cone of cheap soft serve vanilla hits the spot!

The plan for Sunday was to take the ferry to Brooklyn and walk across the Brooklyn bridge into the city. We grabbed breakfast at a local bagel shop so got to spend some time walking around Alison’s neighborhood a bit. I totally see why she and her husband want to buy an apartment in the area since they’re in NYC for the long haul—it’s a lovely neighborhood.

Sidenote because we ran into this for breakfast: I’m totally a city-slicker, but I live in a city where you can swipe a credit card everywhere and never need cash. Which is great, because I never carry cash since it’s way too much effort to track and then I’m wondering what on earth I spent that $20 on since it’s no longer in my wallet. So many places in NYC only accept cash, have a minimum you have to meet in order to use a credit card, or add a fee on top of your purchase if you pay by card. It’s such a different lifestyle!

The ferry ride was lovely (if I lived in NYC and had the option of taking that to work, I totally would!), and walking across the bridge has been on my bucket list for quite a while. Instead of being overcast like the forecast had said, it was warm and sunny so we got great views across the bridge.

We were also getting sunburned so we found a park on the Manhattan side of the bridge and sat in the shade for a while. I absolutely love that DC has so many parks all over the place; I honestly don’t think I could live in NYC (for a number of reasons, not just the lack of easy access to green spaces), but sometimes the parks in DC are pretty small and it was nice to find more substantial shady spots in NYC.

We then spent the rest of the day wandering around the area: we stopped by the 9/11 memorial, which I hadn’t been to—whoever designed it did a fantastic job. We stopped for a slice of pizza, as you do, then walked down Wall Street and then through Battery Park and saw the statue of Liberty from a distance.

The best part of the afternoon was when we stopped into a little coffee shop for some tea so we could rehydrate and cool off a bit. We sat on the little porch for about an hour to kill time before heading back towards Port Authority for me to catch my bus back and got treated to a lovely concert, thanks to the bar across the street where an old-timey band was playing music that sounded like it was from the 20s and 30s.

We stopped at a restaurant so I could grab dinner to eat on the bus, and Alison’s husband met us there with my backpack, which was really nice of him so I didn’t have to walk all over the city with it on my back all day. My return to DC was also later than it should’ve been (#busproblems) but thankfully I still got home more or less around my normal bedtime instead of too much later.

Not bad for a weekend in NYC! Honestly the ultimate in travel hacking is going somewhere you have friends so you can stay with them! It’s not great for my social life that most of my friends have moved out of DC (although it’s definitely better for my wallet since I’m not going out with them all the time), but it’s also really nice to be able to travel and see friends at the same time. Plus, not spending money on a place to stay Friday and Saturday night meant I could eat out with impunity, and I do really love food. So all in all, a very good trip.